One of the major aims of this project is to identify surviving sites that played a role in the War of Independence. Michael Fletcher, the Middle Tennessee State University PhD student who has been working on the project over recent months, has been attempting to confirm the locations of the buildings burned on Midleton’s Main Street by British Forces in January 1921. This act was the first official reprisal of the War of Independence, which came as a result of the Midleton Main Street ambush of a few days before. Michael is now in a position to put forward the buildings he has determined were the ones impacted by this historic event. He explains in the post below.

We have been working to complete the full picture of our analysis of the Midleton Ambush by determining the buildings impacted by the official reprisals carried out in consequence of it. As some of the information in the previous post has proven inaccurate, I will set out our current conclusions, as well as the evidence that led us to them.

In total, seven houses were burned by the British in reprisal for the Midleton Main Street Ambush. Four houses were burned outside of Midleton proper, and we will discuss these in the next post. Some of you might ask why we do not include the Midleton Garage and Engineering Works in our list. It is not there because we do not believe that the British burned it as part of the reprisal, or, at least, that they did not do so on purpose. The British never took responsibility for that fire and at least one eyewitness report and one newspaper article express their doubts about the British setting the blaze. We can add to this a report that the owner of the garage was a Unionist, as well as the fact that the fire did not begin until midnight, much later than the very public burnings of the other buildings, and occurred on the wrong end of Main Street. All the other buildings that suffered are situated south of Charles (Connolly) Street. 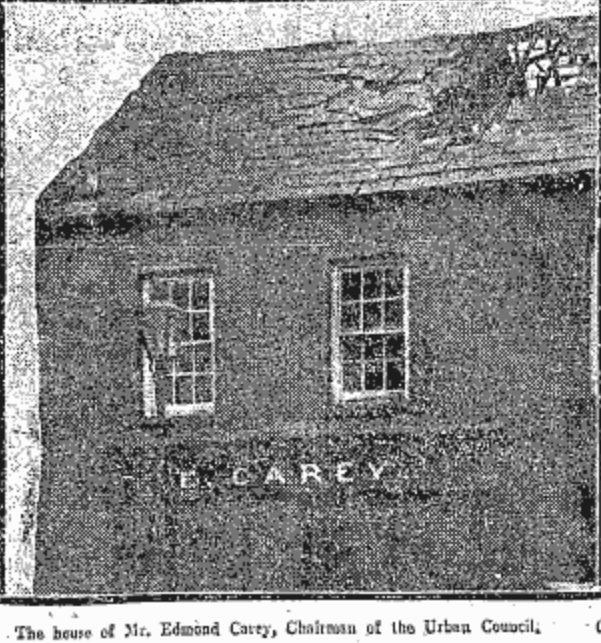 An image from The Freeman’s Journal of 6 January 1921, showing Edmond Carey’s house after the burning.

Edmond Carey’s building sits at No. 50, Main Street (all addresses reflect current numbering). Eyewitness reports and newspaper accounts all agree this building was burned. A photo in the Freeman’s Journal of January 6, 1921 (above), shows the building with the name “E. Carey” painted over the front door. While this photograph edits out the surrounding structures, the British Pathé film clip, (which you can view here), locates the building next to the current Batt Murphy’s pub, as both the arched doorway and arched carriage entrance are clearly visible.

Carey’s as it is today, now Walsh’s Pharmacy

Paul McCarthy’s sits a few doors down from Carey’s building at No. 54, Main Street. The 1911 census has McCarthy’s address as, at that time, 51 Main Street (the numbering system on the census does not correspond to those on the Main Street). The next building on the census return, 52 Main Street, was The Midleton Arms Hotel (today J.J. Coppingers’). No known photo exists of the house after the reprisal, but in his recollections of the Midleton Ambush, I.R.A. Volunteer Dan Cashman notes specifically that he took up a position in McCarthy’s doorway prior to the ambush. The site was also pointed out to us by local historian John Fenton during our December workshop. 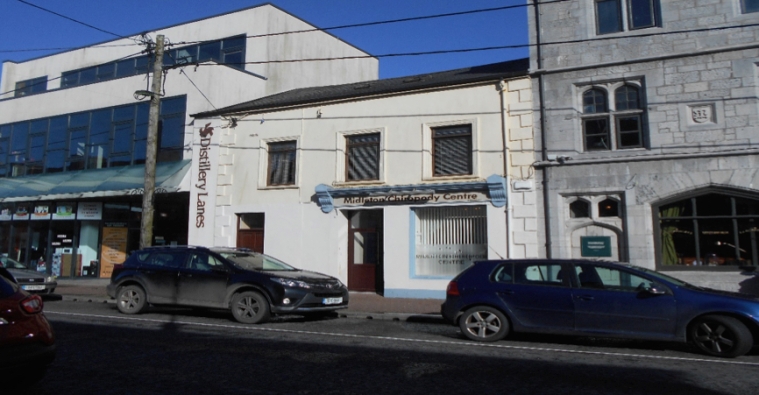 McCarthys, today Midleton Chiropody Centre. This building was not only burned out by the reprisals, but it’s doorway can also be identified in which IRA Volunteers launched their attack during the Midleton Ambush.

John O’Shea’s building is located at No.76, Main Street, across the alley from Finins Restaurant. It is still owned by the family with the name “O’Shea” displayed over the front door. We further verified the location by comparing architectural elements between the Freeman’s Journal photograph from January 6, 1921, with the present structure. Even though it has been somewhat modified, the silhouette is the same, as are the size and placement of the windows on the façade. 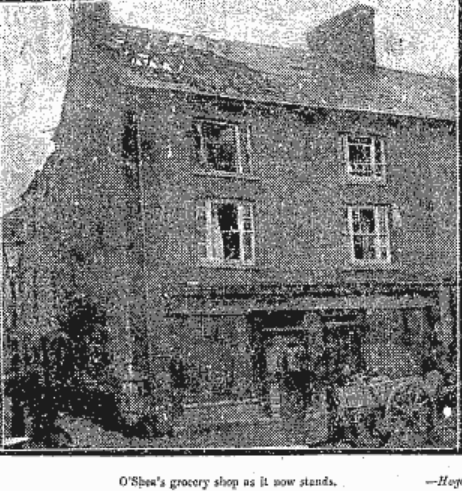 With the addition of the reprisal sites, we are now in a position to identify all the locations associated with both the Midleton Ambush and follow on reprisals in the Main Street. We will explore the ambush itself in further detail in a future post. Our next post will focus on our efforts to obtain further information on both local safe houses and those locations burned outside of the town. If you have any information that you feel would be of assistance to the project, please contact us at landscapesodrevolution@gmail.com

← Project Update- And Appeal!
In Search of Safe Houses →